Elvin Box, Chair of London Construction Excellence Club and a strong I Am Here advocate, talks about his experience with mental health in the workplace, living with cancer and his efforts to advocate for more openness in workplace conversations around mental health.

I Am Here: Elvin, please tell us about the first time you encountered mental health issues.

Elvin: My first encounter with mental health problems happened in my early twenties, as an assistant project manager on a refurbishment in Knightsbridge, London. Imagine a scaffold and hoist tower six floors up that has been secured incorrectly.

Chris, a work colleague and also in his twenties with a wife and a baby, had only been on the site for two days. As he was stepping backwards from the hoist platform onto the scaffold, he fell through the gap. He crashed against the hoist tower and fell to his death. During the immediate hours after this horrific accident, I was calmness personified, even though the pain and anguish of the others involved was palpable.

Several weeks later, I felt blue. I couldn’t concentrate. I was easily agitated and I was becoming quite paranoid. It was like being in a parallel universe. I recognised life as it was, but I could not relate to it anymore. Nothing felt exciting, I had no sense of anticipation and was just going through the motions.

On the advice of both my mum and my wife, I went to see my GP. He was a good man and I had always related to him, so I was happy to talk to him candidly.

I sobbed my way through the consultation, describing the accident and its aftermath, with the resulting difficulties I was now experiencing.

He explained to me I was suffering with depression. I was prescribed a short course of Valium, which during the 1980s was the antidepressant of choice, and pretty much left to my own devices try to return to normality.

IAH: Can you share your experience with prostate cancer?

Elvin: At the end of June 2016, I was diagnosed with aggressive prostate cancer. There was a high risk that if left untreated, the tumour would spread, rendering it incurable.

Consequently, my death could occur inside five years. Having researched treatment options and after much soul-searching and consultations with specialists, my wife and I agreed on the most radical approach to my predicament: to remove the prostate in its entirety via robotic surgery. The surgery would also cause the quality of my life to diminish drastically, primarily resulting in incontinence and erectile dysfunction (EDF).

Four years on, I’m currently cancer free, fit and in good physical condition. Also, and thankfully, I am making excellent progress with overcoming incontinence and EDF.

IAH: You have been through a life-altering event. Whilst the focus initially was on your recovery physically, is it fair to say your mental health suffered?

Elvin: It was something that crept up on me. For nearly a year post-surgery, I was fine.

Many men endure life changing side effects as a result of prostate cancer treatment, which can strike at the heart of what it means to be a man, and many struggle to come to terms with the aftermath.

Elvin: Fighting to overcome incontinence and EDF led to all the anxieties, frailties and negative feelings I had gone through as a teenager regarding my prowess as a man, come flooding back. I was anxious, irritable and, quite frankly, paranoid.

Cancer patients are up to five times more likely to take their own life than the general population and need more support to identify and treat depression.

Through this dark period of never-ending dog days, as I call them, I never had suicidal thoughts. I do agree with Dr. Mehran Afshar’s assertion that cancer patients need help and support, where help-seeking and help-giving behaviours become the norm.

IAH: You talk openly about your lovely wife Jude and how she stayed by your side at what seemed to be the lowest point of your mental health struggles.

Elvin: I did a good job hiding my struggles at work, but my poor wife endured a torrid time with my anger, the ensuing volatile arguments and my totally unacceptable, violent behaviour.

On one trip to Barcelona, the police were called on two occasions because members of the public were concerned that I would physically harm my wife. Our marriage was being sorely tested. We agreed there was a real danger that my attacks might become so frantic and furious that I would eventually kill her. 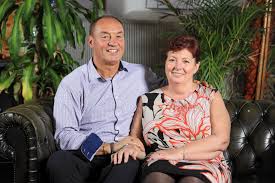 IAH: And what has changed? Jude remains by your side; how are you both now?

Elvin: Thankfully, my wife and I made a pledge to one another, that at the very first sign of a discussion becoming an argument, both of us would stop, take a two-minute break and reconvene the conversation without a hint of raised voices.

Our relationship is now hallmarked by our respect, forgiveness and unashamed and undying love for one another. We spend as much time as possible together, especially with our family, yet still get to enjoy time by ourselves. Jude has a passion for crafting, whilst I [like to exercise].

IAH: You experienced a life-changing event at work and you also mentioned earlier that you hid your mental health issues at work following your prostate cancer. Can you tell me the difference between the two experiences and the culture in your workplace around your mental health struggles?

In those days, deaths on construction sites were quite common and the impact the fatality had on the people involved was never given any consideration.

Also, back in the 1980s, open and honest discussion around the impact work was having on an employee’s mental health, in any given profession or trade, was pretty much nonexistent.

Fast-forward 30 years and I am working for a global construction organisation in London and I am coming to terms with a prostate cancer diagnosis, choosing the treatment option and undertaking a difficult recovery programme, fraught with serious mental health issues.

Very fortunately for me, things have changed dramatically regarding dealing with mental health in the workplace. Mental health is at long last on the table for discussion and managers are emerging who can deal with such highly emotional and sensitive subjects.

He ensured he always gave me time for us to talk through the challenges I was facing, at any time of the day, often at weekends. He was also instrumental in arranging the counselling I received through a work-based scheme. He was an exemplar.

IAH: What final thoughts would you like to leave the folks on construction sites across the UK?

Elvin: I’m passionate about creating a positive message about mental health, which I do wherever and whenever possible. Talks on men’s health, particularly mental health and suicide prevention, provide me with immense joy, especially in male-dominated businesses where I really feel my experience is of benefit.

I would love if every man (and woman) reading this interview would live the belief that “it’s ok not to feel ok; and it’s absolutely ok to ask for help.” If we can change our mindset and slowly change our behaviours together, we will be a much healthier and more fulfilled society.

In this one hour Tribe Member course we will gain the courage, confidence and skills to Show you care to anyone, anywhere. By completing this course, you will officially join the I Am Here global Tribe and receive your completion certificate.

In this 90-minute session, you will be brought through the I Am Here: Ambassador virtual class. By participating in this class, you will gain the courage, confidence and skills to Show you care, Ask the question and Call for help. Upon full completion of the I Am Here: Ambassador virtual class, you will be able to safely signpost someone to help and support when needed.

It’s ok not to feel ok; and it’s absolutely ok to ask for help.

This website uses cookies to improve your experience while you navigate through the website. Out of these cookies, the cookies that are categorized as necessary are stored on your browser as they are essential for the working of basic functionalities of the website. We also use third-party cookies that help us analyze and understand how you use this website. These cookies will be stored in your browser only with your consent. You also have the option to opt-out of these cookies. But opting out of some of these cookies may have an effect on your browsing experience.
Necessary Always Enabled
Necessary cookies are absolutely essential for the website to function properly. This category only includes cookies that ensures basic functionalities and security features of the website. These cookies do not store any personal information.
Non Necessary
Any cookies that may not be particularly necessary for the website to function and is used specifically to collect user personal data via analytics, ads, other embedded contents are termed as non-necessary cookies. It is mandatory to procure user consent prior to running these cookies on your website.
Analytics
Analytical cookies are used to understand how visitors interact with the website. These cookies help provide information on metrics the number of visitors, bounce rate, traffic source, etc.
Uncategorized
Undefined cookies are those that are being analyzed and have not been classified into a category as yet.
Functional
Functional cookies help to perform certain functionalities like sharing the content of the website on social media platforms, collect feedbacks, and other third-party features.
Other
Other uncategorized cookies are those that are being analyzed and have not been classified into a category as yet.
Advertisement
Advertisement cookies are used to provide visitors with relevant ads and marketing campaigns. These cookies track visitors across websites and collect information to provide customized ads.
Performance
Performance cookies are used to understand and analyze the key performance indexes of the website which helps in delivering a better user experience for the visitors.
Save & Accept